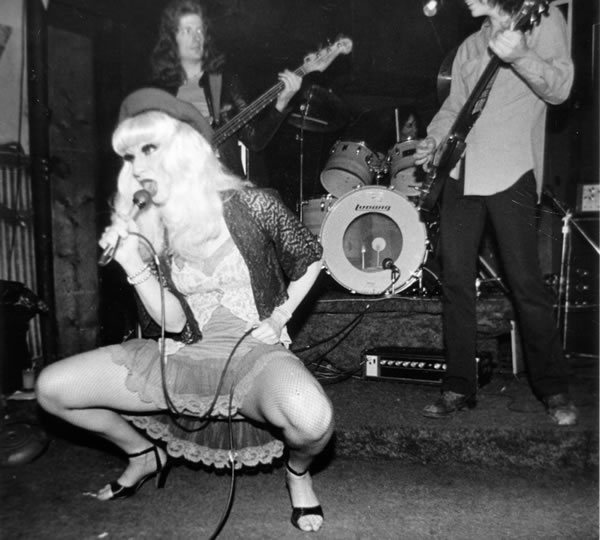 Fast forward twenty-five years after I bought my first Rock Scene Magazine at the age of 11 (nearly 12) at Bill’s Super Market grocery shopping  with my mom on the West Side of Bartlesville Oklahoma;  I was living in NYC for the first time and subletting an apartment from a folksinger / porn-personality, who had moved to LA. At this time, my band the Chainsaw Kittens were no longer active. Abandoning my art, I decided to do what other people do. Thus, I had a horrible advertising job. This because the economy, under the Bush II administration, had imploded leaving an insane shortage of jobs. I decided to move back to Oklahoma after living in NYC for two years and working at the advertising agency for a year. I called Dudley – the folky John Holmes – and told him that I was done with NYC and would no longer be needing the place. I agreed to help him find a new sub-letter.

A few days later he called me back.

“Tyson, uh, it looks like Jayne County is looking for a place! I gave her your number. She may call.”

Of course, all of my Rock Scene childhood images of Jayne (formerly Wayne) came flooding into my mind, all of those advice columns and then the pictorial spread “At Home with Wayne”, which showed Jayne in his/her fabulous Manhattan apartment. And then there were those articles in Hit Parader that were always a real kick into rock and roll fantasyland, in which Jayne described scrapes with the police whom she nicknamed Alice Bluegown, and told of a time when she was at one of the many rock parties  and her idol Ray Davies was there, hungry. Being a lover of kink and the Kinks, Jayne scoured the party looking for a fork, and finding one on the floor under some ashes and puke, she wiped it on her dress and offered it to Ray so that he could eat his meatballs. And then, those articles where she gushed about Dusty Springfield, Dusty in Memphis in particular – all of this flooded back to me.

Jayne had always been on the pulse of the rock and roll subculture and is undisputed first transgender rock an roll performer.  She/he had once dated Bowie for God’s sake—”Rebel Rebel,” though officially about David Doll of the New York Dolls, unofficially could very well be about Wayne Jayne and was perhaps even influenced by her song “Queen Age Baby,” as could “The Jean Genie,” though officially it was about Jean Genet. Jayne was the Jean Genet of 1970s New York. She, in many ways, was like a distant auntie that I had never met, a distant auntie who Warhol had cast in his play “Pork” and had written the transgender anthem “Man Enough to be a Woman.”

”Bowie, he’s a vampire,” Jayne told me during the course of our first phone conversation, “and a bad kisser.” Naturally, I knew about her dalliance with the Thin White Duke and that she had actually been in the London production of Pork in 1971 and went to see Bowie at a small club before he was Ziggy and was still folky fey. The rest has been documented repeatedly.

“You know,” I told her, “I used to love your advice column in Rock Scene Magazine.”

“Oh, child,” Jayne drawled in her best Georgia peach accent, “that column got me in a lot of trouble, a lot of trouble. A young boy wrote in who could not afford musical equipment, and I told him to beg, borrow, or steal to get it.”

“Oh gosh!” I exclaimed. “I remember that letter. You told him to do whatever it took to get it.”

“Yeah, well, he did. The dummy robbed a liquor store and got caught. Then he blamed me! Little ol’ me, can you imagine?”

“Yeah, I felt terrible, Child, terrible!” she confessed, “but I didn’t think he would actually take my advice, the dummy.”

At that point, Jayne got down to business about the apartment. She needed a place as soon as possible.

“So, dahling, I would love to look at your apartment. “ she continued. “I’m in a bad situation right now, a bad situation. I rented this place from a friend of a friend and he said he was never never going to live in New York again, never ever,” all of this she drawled out like molasses, “but then after two months in Cleveland he decided he had to live in New York again, so he came back and moved all of my stuff into the kitchen! I am too old to sleep in the kitchen like some discarded Cinderella!” With that, Jayne took a breath and added, “Sugar, maybe I can come by this week.”

Later in the week, she called me. She was in the neighborhood with a friend and she wanted to see the apartment.

The apartment at 101 St. Marks, across from the Led Zeppelin Physical Graffiti building, was a disaster that nothing short of an atomic blast could rescue. My whole apartment, sadly, was an East Village Ode to raunchiness and neglect, heroin chic without the heroin. Really, that was the only thing missing to make it truly squalid, used hypodermic needles. And though I never saw any, I think the ghost of hypodermic needles roamed the apartment at night sometimes giving me heroin fever dreams.

There were water stains all over the ceilings, ceilings on the brink of collapse. The shower had all of the cleanliness of a slaughterhouse stall. Dudley and the other parade of tenants had left tons of debris behind, books, papers, notebooks, clothes, dirty linen, rags, discarded small broken appliances and busted chairs – whatever. In between the two grimy windows sat a cheap white fiberboard bookshelf with most of the shelves missing where the books and papers, that did not litter the corners, resided stacked on each other as if someone had quickly moved out of the apartment and meant to come back and get them but never did. The whole place had a transitory prison camp feel to it, a rat’s nest with its namesakes running around occasionally underfoot.

Jayne was on her way over. There was really nothing I could do to clean up other than pick up debris off of the floor. And stack it in corners. Oh well, she was known for rescuing forks from puddles of puke and cigarette butts for pop royalty.

Fifteen or twenty minutes later, Jayne showed up with a friend. I buzzed them into the building and we walked back to the apartment which was in the back of the building. Jayne was wearing a big floppy hat and a large formless cotton dress with granny boots. Her female friend looked like a lawyer or perhaps a successful publisher.

I led them into the apartment. The friend looked appalled. I waited in anticipation for Jayne’s reaction. After what seemed like an eternity but was probably less than a minute, Jayne appraised the apartment.

“I love it! I really love it! It’s perfect! Per-fect!” she gushed. She then walked around looking at the few crumbling, cracking walls of the one bedroom apartment; one bedroom is a generous term for it. The double bed barely fit into a nook right off of the front door, quintessential New York living.

“These walls!” she exclaimed as she pointed to the claustrophobia-inducing living room walls. “I have wonderful plans for these walls. These will be pop art walls. I will paint a huge picture of the lizard king — Jim Morrison, a big pop art painting of his face on this one.”

I nodded, impressed with her ideas. “This one I will devote to the tragic goddess Nico! I love it. The bathroom-” by this time we had made our way to the bathroom in the hall, “I think it will be divine cotton candy pink. Oh, this is perfect. Perfect!”

Jayne had completely fallen in love. Her friend was less than impressed and probably even a little shocked by the condition of the place, which really is saying something when you think of the filthy squalid living conditions that people accept as normal in NYC. Nevertheless, Jayne loved the place. She told me she would call later and make arrangements.

As I said earlier, I was working an advertising job that I hated. Actually, most of my co-workers hated it as much as I did. One co-worker, a really sweet woman who did some extra work here and there as an actress, kept telling me – “Don’t stay here. I have been here 11 years. Get out! Get out while you still have time. Don’t stay here!”

A week or so before Jayne came to look at my apartment, my boss, the director of the department in which I worked, Broadcast Traffic, had held a meeting in which she bullied the whole staff and told them that in the current economic climate everyone was lucky to have a job.

“This job is a gift,” she told us all as she yammered on and on. “I will not tolerate any dissent. Anyone who does not toe the line may leave!” This meeting was positively Kafkaesque with a dash of Camus.

After being scolded for no particular reason amongst the rest of the staff, I decided that this job, this “gift,” was one I no longer needed. That was when I decided to go back to where the deer and the antelope play. Home, home on the range. Goodbye New York City.

Nevertheless, I was certain that I could stomach advertising for a month or two in order to save some money so that I would have a little cash when I returned to Oklahoma.

But then, the next day, Jayne called me.

“I will give you $1,000 cash in your hand if you move out in two weeks,” she said in her best hustler voice.

Fortunately, I was ready to be hustled. I quickly thought this proposition over. I had planned to work another month or two and save some money but even if I did that, I would probably not be able to save $1,000, free and clear. And I needed more than anything to get the hell out of that advertising job. Really, Jayne – Sweet Saint Jayne – came into my life at the perfect time, as if sent by God, or the guardian angel of transsexuals and pop punks. My transgender guardian angel, Thank you Jayne.

“Okay, dahling, I will bring the money to you tomorrow and then I will take over paying the rent at the first of the month when you move out.”

As soon as Jayne brought me the $1,000, as soon as I knew it was a real deal, the following morning, I walked into my boss’ office — the boss who had told me and my co-workers that our jobs were a gift –  I walked in and gave my two weeks’ notice. This was one of the best, most liberating moments of my life. My boss was shocked. No one quits such a good job at such a good company, no one but me that is. I was done with advertising. I would never ever hold a job again in which I was not committed to the cause of the job. From then on, I decided life is too short to have a job that was no more than a source of income. Thank you Jayne. You are a saint and absolutely you are “Man enough to be Woman.”